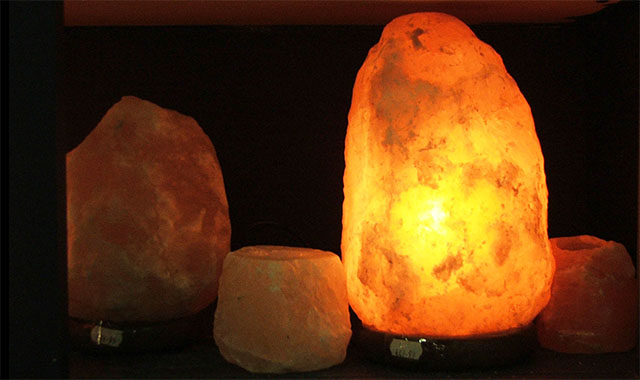 We’re often asked at Evolv about the range of Salt Lamps we carry, and what their benefits are apart from adding a touch of distinctive character to your home.

The truth is that Salt Lamps do much more than that, as they deliver many health benefits too, particularly for people with asthma, allergies, or a persistent cough.

To understand how, we first need a basic chemistry lesson. Don’t worry – it won’t be like school, and there won’t be an exam at the end of it!

All matter is made up of atoms, whose three main particles are protons (positive charge), electrons (negative charge), and neutrons (no charge). Electrons orbit a ‘nucleus’ of protons and neutrons,  like the Earth revolves around the sun. Occasionally an electron flies off and when it does, it leaves behind a positively-charged ion, as the positive charge of one of the protons is no longer cancelled out by the negative charge of the electron. These ions want to steal an electron from another molecule, to restore balance – which basically means that positively-charged ions are trouble. Hygroscopic properties of Salt Lamps (essentially an absorbency power) can help get rid of them.

The main benefit people immediately notice when first using a Salt Lamp is their incredible ability to remove contaminants such as dust, pollen, and cigarette smoke from the air. They do this thanks to their hygroscopic power – meaning that they attract and absorb water molecules and all the contaminants they are carrying. As the Salt Lamp warms up from the bulb inside, that water then evaporates back into the air, but the particles of dust, pollen, smoke, etc., become trapped in the salt.

Because Salt Lamps remove particles of dust, mould, mildew, pollen, etc., from the air, placing a lamp or two in where you spend the most time in your home can drastically reduce allergy symptoms. Even people who suffer from asthma should notice a big difference after a week or two.

Most homes are filled with positive ions, caused mainly by electronic goods such as TVs. One of the unwanted effects of this is that breathing in lots of positive ions affect the microscopic hairs that line your trachea (windpipe), and so they don’t work as well as they should in keeping contaminants out of your lungs – leading to coughing. So, by removing these positive ions from the air, a Salt Lamp helps your body to filter air more efficiently, so the particles that make you cough never even make it as far as your lungs.

Think about how getting a good breath of fresh air helps you feel better and more alive – maybe from being outdoors in the countryside, at the beach, or even driving with the window down. That’s because fresh air like that contains a higher concentration of negative ions than you generally find indoors. Using a Salt Lamp helps replicate those levels of negative ions, and cuts down on the numbers of positive ones. If you’re feeling tired or run down, try keeping a Salt Lamp in the room or rooms where you spend most of your time – you should notice a difference in a week or two.

Electromagnetic radiaton flows throughout our homes from devices like TVs, mobile phones, computers, stereos home appliances, etc. In the long term, exposure to it can cause increased stress levels, chronic fatigue, and even decrease the body’s immune system. However, a Salt Lamp works to neutralise electromagnetic radiation by emitting negative ions into the air. Keep one next to your computer or television, and feel the difference it makes.

Another side effect which results from over-exposure to positive ions in the air is that it robs you of quality sleep. This happens because those positively-charged particles can actually reduce blood and oxygen supply to the brain resulting in irregular sleep patterns. Himalayan pink salt lamps are natural negative ion generators, thus they can help to reverse this problem. Keep one or two around your bedroom to improve the air quality so you can get a better night’s sleep. If you don’t like to sleep with a light on, just keep them on during the daytime and turn them off at night – they’ll already have done their job for that day.

Salt Lamps are a great way to naturally enhance your mood or help you relax and unwind at the end of the day. They are also great for improving concentration. Again, this is due to the effect of the negative ions on your body, improving blood and oxygen supply to the brain and other organs, as well as providing a boost of serotonin – the neurotransmitter which makes us (literally) feel happy.

In addition to all other benefits of the negative ions they produce, Salt Lamps can also help treat Seasonal Affective Disorder (SAD) because the soft light they give off is close to the warm natural glow of sunshine. So during the winter months in particular, use a Salt Lamp to help you feel better.

Static electricity can cause stress and frustration, but Salt Lamps are a natural way to neutralise the airborne ionised particles that cause it.

A Salt Lamp typically uses only a low-wattage bulb and so is extremely environmentally-friendly to run, while reserves in the mines where the salt comes from are sufficient to last several more centuries, so we are not overly using up a valuable natural resource.

If you need further advice on Salt Lamps or if you’d like to see the range we have to choose from, just call to see us at Evolv Health & Wellbeing Store at 2 Castle Hill, Enniscorthy, Co. Wexford.